Bonefish found in the inner islands of the Seychelles rarely swim in shoals and do not swim in shoals of hundreds (and definitely not in shoals of thousands). They are educated – they do not simply eat anything and have been known to refuse a perfectly good Charlie that worked just yesterday. And catching Bonefish in the inner islands takes patience, effort and hard work. They can be downright enigmatic.
Dad didn’t get one on his trip here in 2004. He’s been visiting for three weeks and has been practicing his double haul and perfecting presenting a heavily weighted Charlie on a #9 as if it were a dry fly on #3.
Yesterday we had a early mission to the Grand Anse flats on Praslin. The goal was to find the bones or Golden Trevally that quietly inhabit these flats. The tide wasn’t perfect, the breeze was a little strong and, although they were around, the Bonefish weren’t exactly calling us over to join them for breakfast.
It took awhile before we found three big fish feeding tacitly in the shallows. They were moving left to right between us and the beach. The cast that needed to be made was fairly long and straight into the wind.
Dad – a trout fisherman by birth and life has only recently bothered to get to grips with double hauling a nine weight – swore before his first cast even landed. Luckily it was behind the last fish and made no difference to the body language of the three feeding fish. He went into trout stalk mode. I don’t I could have moved around the flats like he did. Obviously the years of stalking brown trout on rock strewn streams and rivers made moving across the sand a pretty straight forward procedure.
Suddenly there was a lot less distance to cover and the wind, although across his casting shoulder, was far less of an obstacle. The pink Charlie looped out and landed with a plop.
Strip, strip, INSIDE!
Textbook hookup and the rest was simple. A few burning runs and eventually he was tailed.
I’m not sure if Dad could choose between solemnity or biggest smile ever in which to mark the occasion.
He can now call himself a saltwater flyfisherman. 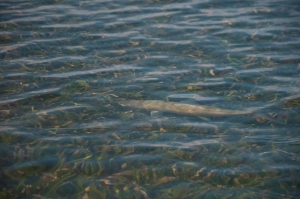 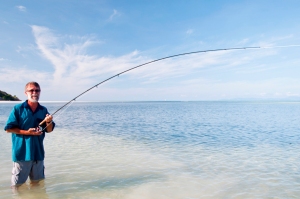 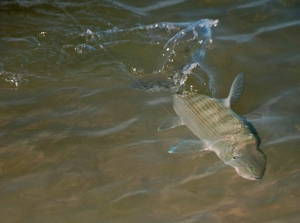 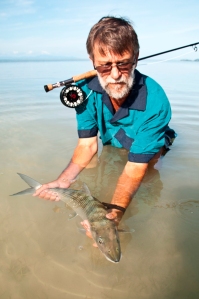 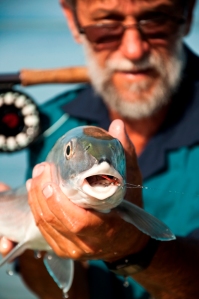 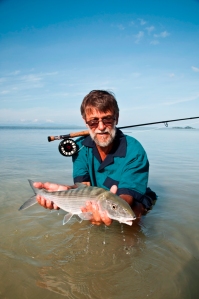 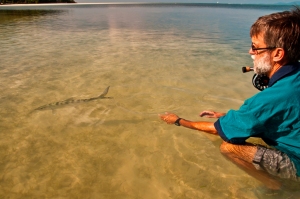