After yesterday’s frustration with murky water, today I headed towards the Heads and fished the flats around the “Grass Atoll” – small mud bank whose sedge grass resembles the shape of a tropical atoll. It’s a spot where we’ve got grunter before and also Steenies on prawns. I’ve been wanting to fish a pushing spring tide here for awhile but timing and weather have been off for the last few seasons!

The view to the Heads from the sand flats with the already arriving weather!

I started on the sand flat across the main channel from Leisure Isle but had no joy. The tide was pushing hard while the wind was humping and I felt I was losing sighting opportunities in the deepening water. I packed up and had a quick paddle across a shallow channel to the grass flats. I found myself in the spot I wanted to be. And I was soon rewarded with tails. Game on!

The grunts were clearly visible in the crystal clear water and consequently were super skittish. I made several presentations which were all denied. I felt the unweighted fly was moving far too quickly in the strong current. The tidal push in this area of the lagoon is particularly strong during the spring cycle. The shallow banks lie directly in the path of the main current that pushes in from the ocean. The water floods the banks at a rate that can be easily be seen minute to minute. This of course means that the fish feeding over the flats move really quickly and your fly and line is hugely affected by drag. My fly was neither getting down quickly enough nor was it behaving like a natural prawn.

I changed to a weighted fly, not unlike Henkie’s Prawn Fly, and started working the current again. While I had no shortage of targets, I felt as though I was spending more time watching my fly line and fly than them! The heavy weather to west was incoming and placed a definite time limit on my sight fishing time!

I decided to move out of the water and take up position in the sedge on the island. Although I worried that I was moving too far from the feeding fish, my choice was vindicated a while later when a shoal of 10 to 15 fish moved along the grass fringe of the ‘atoll’ feeding hard. My position meant that I was able to present very close to the sedge. Most of my leader was on the grass while fly landed in a small eddy created around the grass.  I believe that it was this fortune that allowed the fly get to the bottom without being washed away before the grunts arrived.

The rest was textbook. A fish in of the shoal tailed over the prawn, I tightened up the line slightly, felt a solid weight and allowed the fish to do the rest! Fish On!

It’s been a long time since I got a Grunt in this lagoon. I was thoroughly stoked! Time to get a photo! I popped the grunt into the bottom of the canoe and splashed enough water over the gunwales for it to be able to pump water though its gills. I’ve taken to carrying a tripod when fishing on my own simply because it makes taking decent selfies possible (although there is still a little guesswork and lots of frustrations). I set it up and got off few selftimer shots. 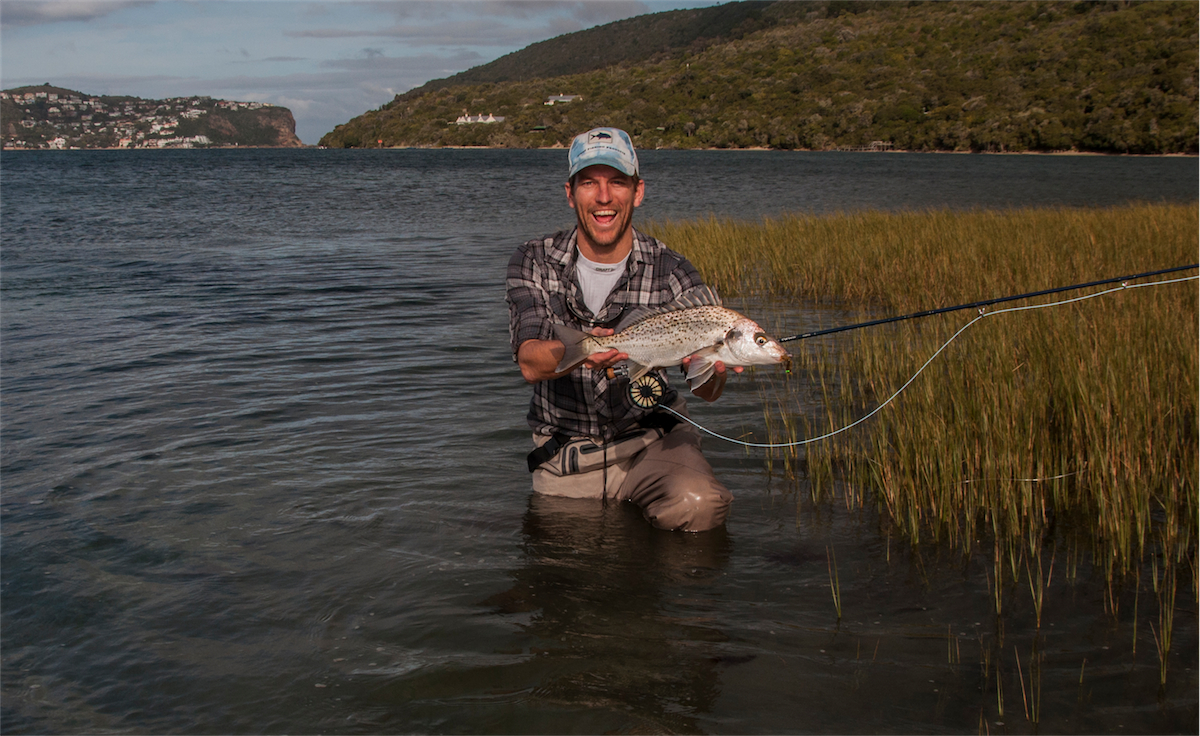 Yes, I’m happy. The Knysna Grunts have been eluding me for a quite a while now!

I wanted to get a release shot along the fish’s back with the Heads in the distance but as I removed my camera from the tripod, it took a glorious swan dive into the lagoon!

It happened so quickly! As I released the camera from the tripod, the now revived Grunt took off between my legs – I lost grip on the strap while trying to not break my favourite #7. The following seconds must have looked ridiculous to anybody watching from shore! I was swinging the camera around my head to get water out of the lens while hopping and jumping over line and rod!

A costly grunt. But the camera is working (got to love those tough Nikons) although there is salt in all the joints and buttons. It’ll need a service. My lens isn’t so happy. Needless to say I got no more photos today!

By the time I had sorted this debacle out the rain had arrived. I changed to a mini NYAP and while working the channel dropoff I managed to pick up two juvenile Garrick before heading home.