Recently Douglas Kretzman shared this post on his blog, No Longer At Ease. Hard to imagine it was 30 years ago! 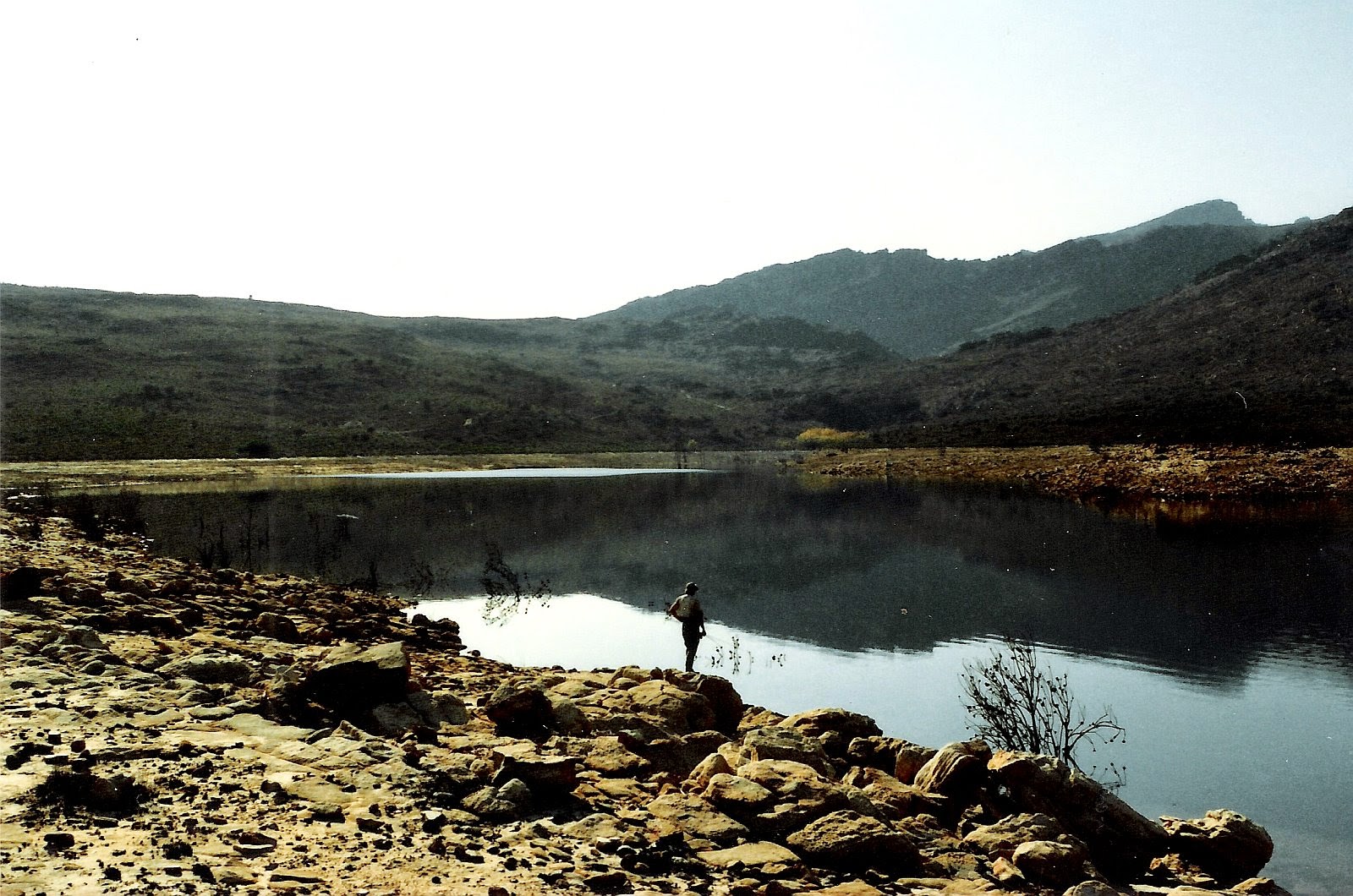 I was reminded of this set of photos by a post on Feathers and Fluoro – happy to see the stream is as yet unspoiled. Go there to see their pictures from 2014. Here are mine from 1984. If memory serves my brother and I were in Cape Town on vacation, which necessarily involved a couple of fishing trips.

The first was to a reservoir high above Ceres. The water was low calm and clear, which gives one to think, as shown in the picture. Those scrubby bushes sticking out the water are proteas, providing shelter and refuge to the trout.

In those days we used to kill and eat the fish. It’s a lot simpler ethically than catch-and-release, but of course unsustainable. I’m nearly sure I caught at least one of these fish that Charles is holding, which would have been a good trip for me. 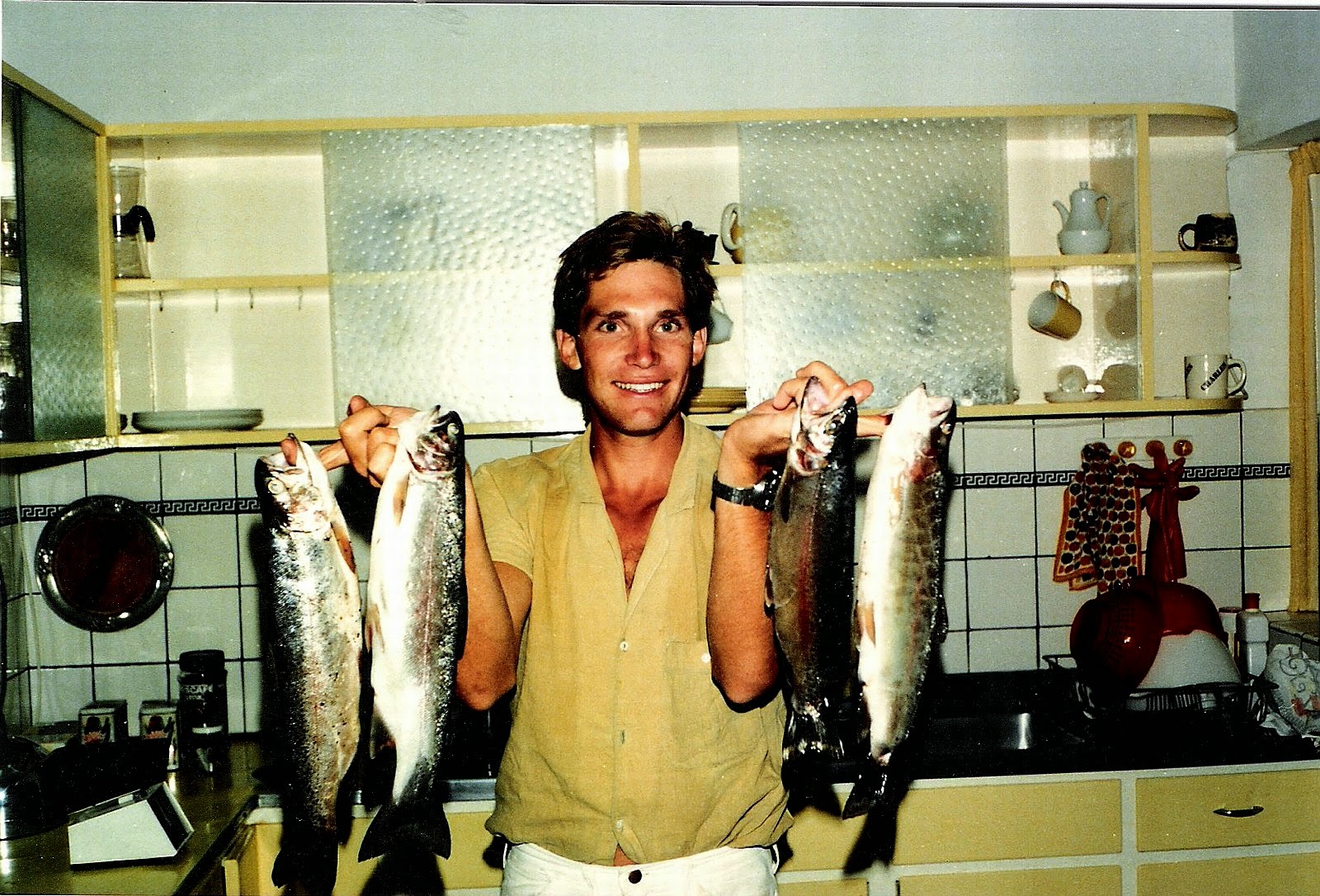 We packed up some rudimentary supplies in grotty old haversacks and took to the hills. Short shorts were de rigeur in South Africa for manly men like us – good for breathability but not so much for sunburns. At this point we had not yet reached the swims, but I had fallen in at least once. 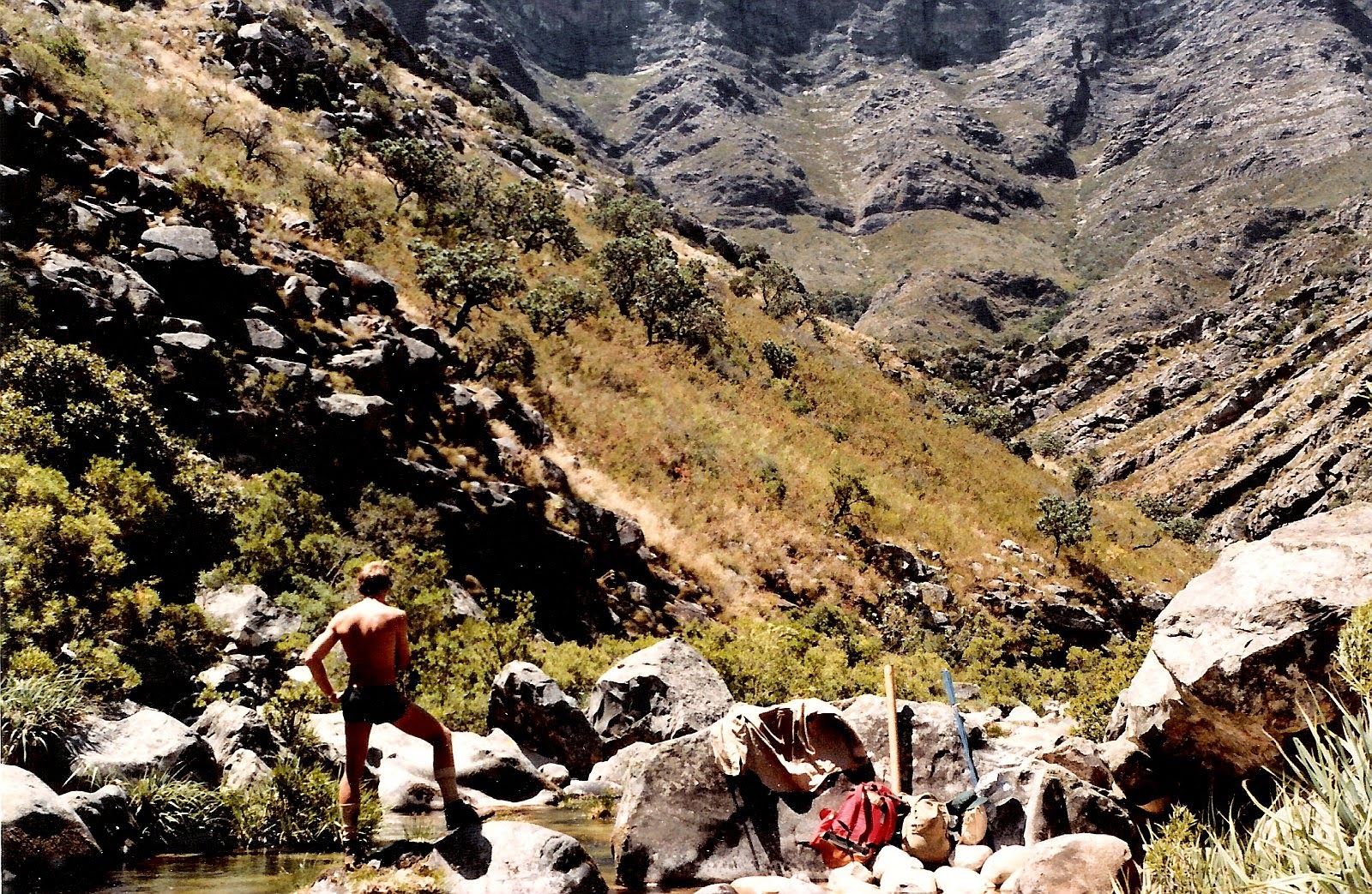 The first swim, a long dark pool below cliffs. The bag goes into a pack liner, thereby becoming a floatation device. There are fourteen or fifteen swims, though we only went up four or so. On another trip Charles dropped in to the canyon by going over a neighbouring peak, and came down the stream through all the swims. He neglected to obtain the required permit. About half-way down a mountaineering club trip overtook the fishermen: he was upbraided for their permitlessness by a pretty redhaired girl wearing nothing but a backpack. 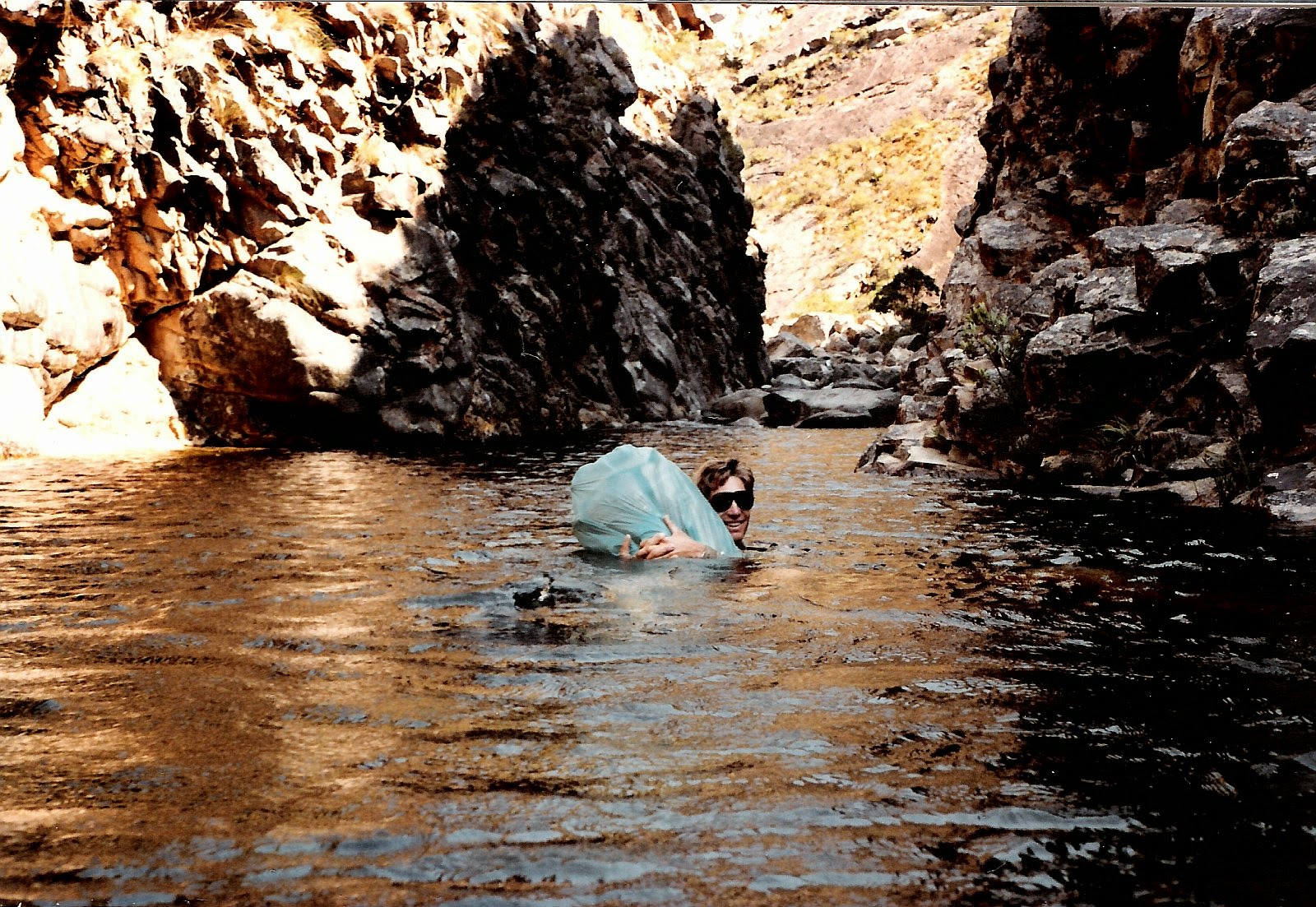 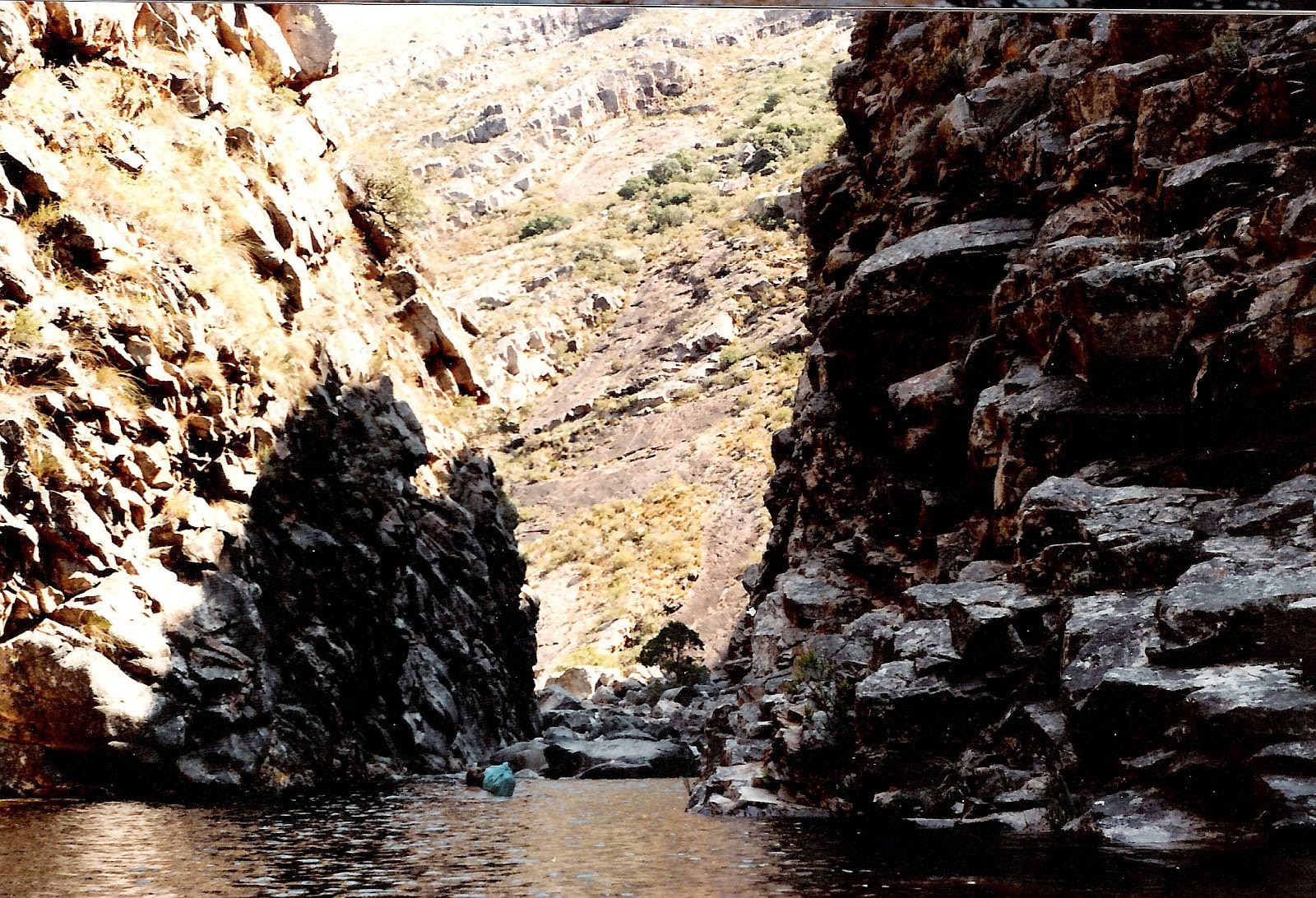 Once above the swim, fishing improves noticeably, pretty plump brown trout to 14″ in the clearest of waters. This one was released. 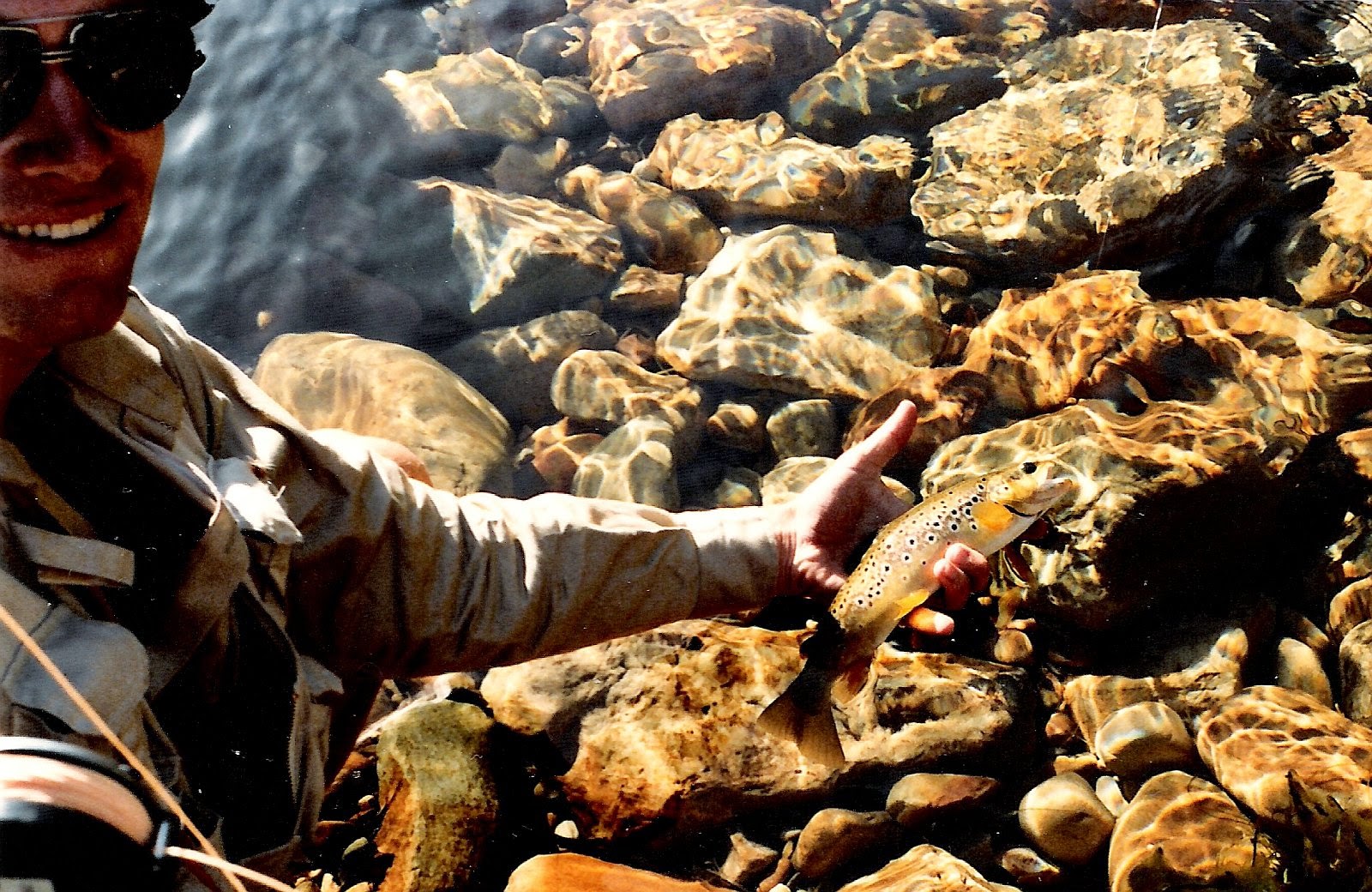 Other smaller fish became lunch by the stream, in that brilliant Cape light. 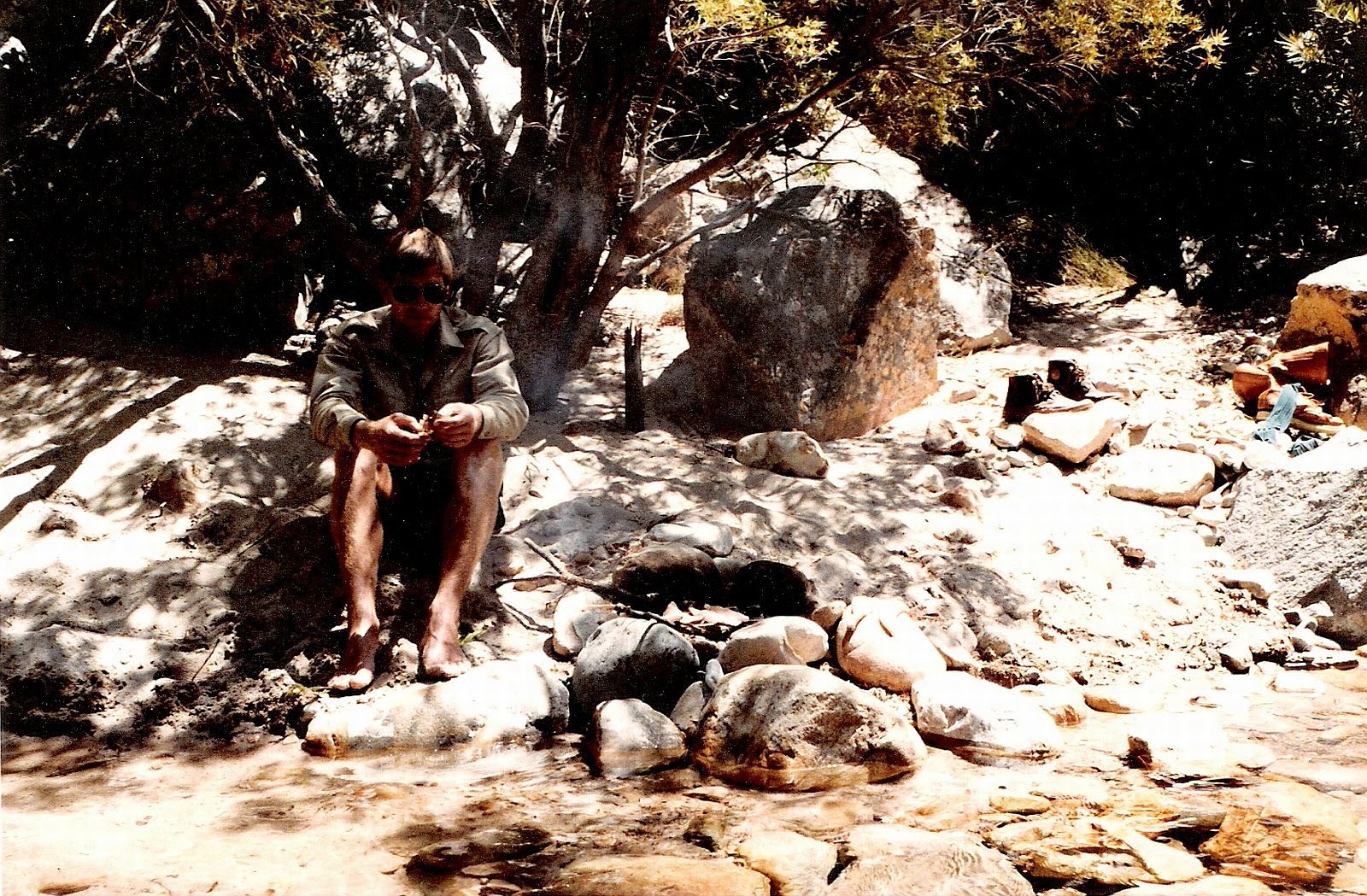 By the evening I’d fallen in multiple times. Here is a still life with fly boxes and other wet gear, and some toes. That rod is an 8′ 5wt Fenwick HMG graphite, the best fly rod I have ever cast. Now it languishes in Perth surrounded by saltwater fishing that requires much heavier rods: like Borges’ knife in a drawer, dreaming of its bloody past. 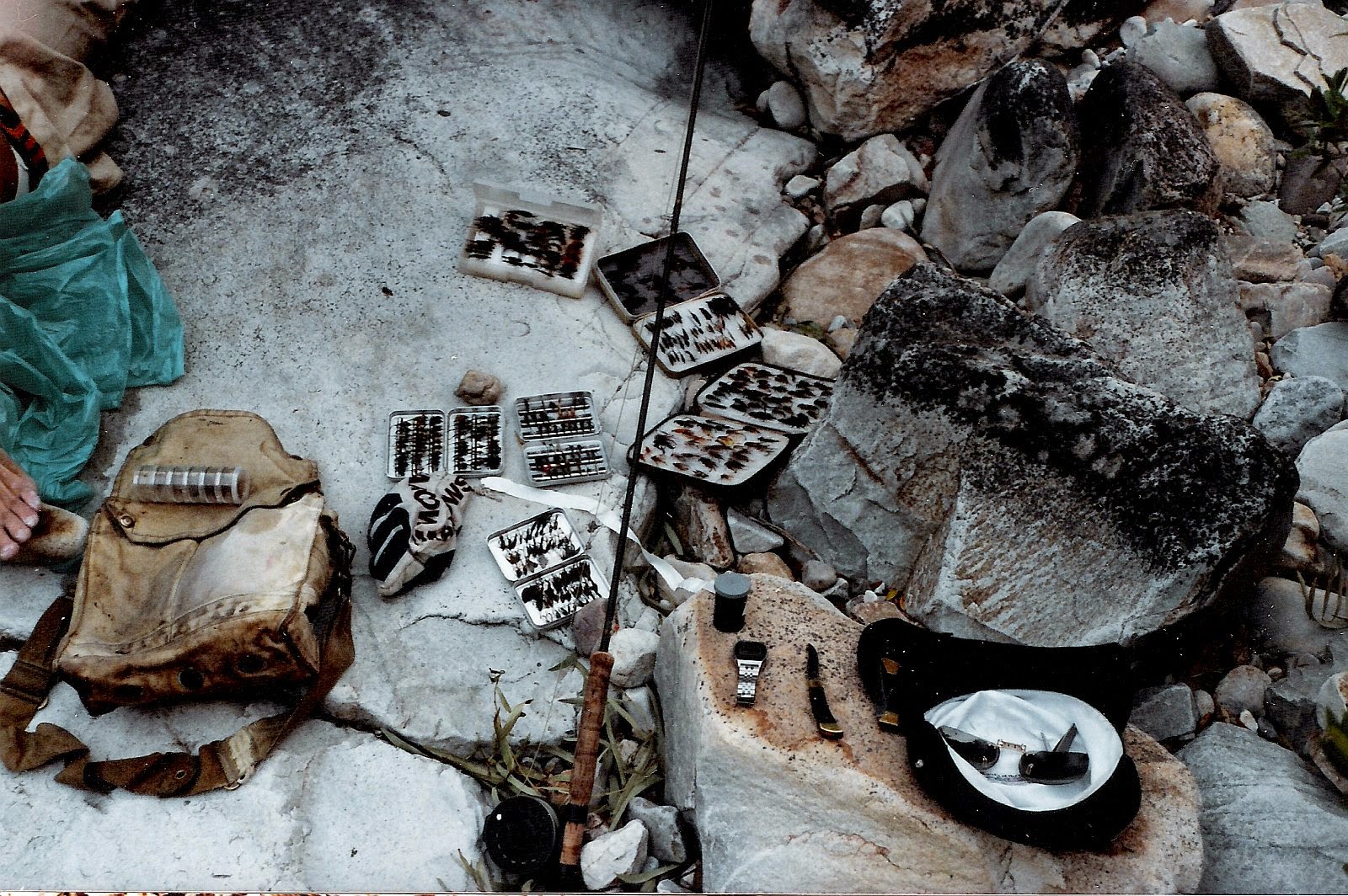 The firepit for the evening takes less than a minute to construct. There are baboons in these kloofs, and their predator leopards. Sometimes in the dark there are green eyes at the edge of the light, embedded in shadows. The memory of golden Cape cobras swimming downstream past our wading legs, gives us unquiet dreams, sleeping as we are on the rocks. Snakes like warmth and we have the warmest bodies in this ravine. The water flows cold and companionable in the dark, its rills chuckling and purling around us. 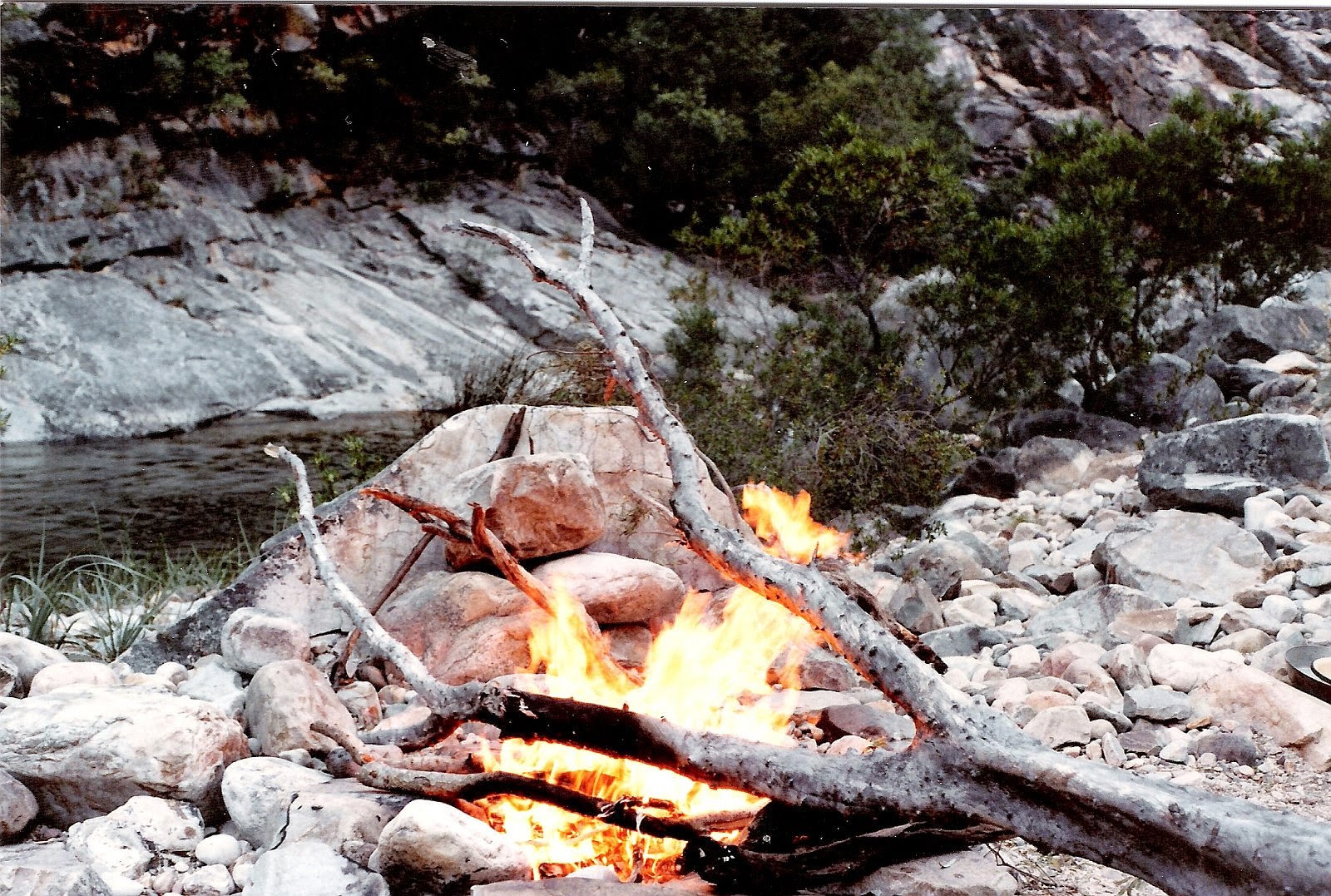 Coming out of the mountains onto the Cape Flats there was a rare colourful sunset over the freeway. I did not know it then but that was the last time I would ever get above the first swim. 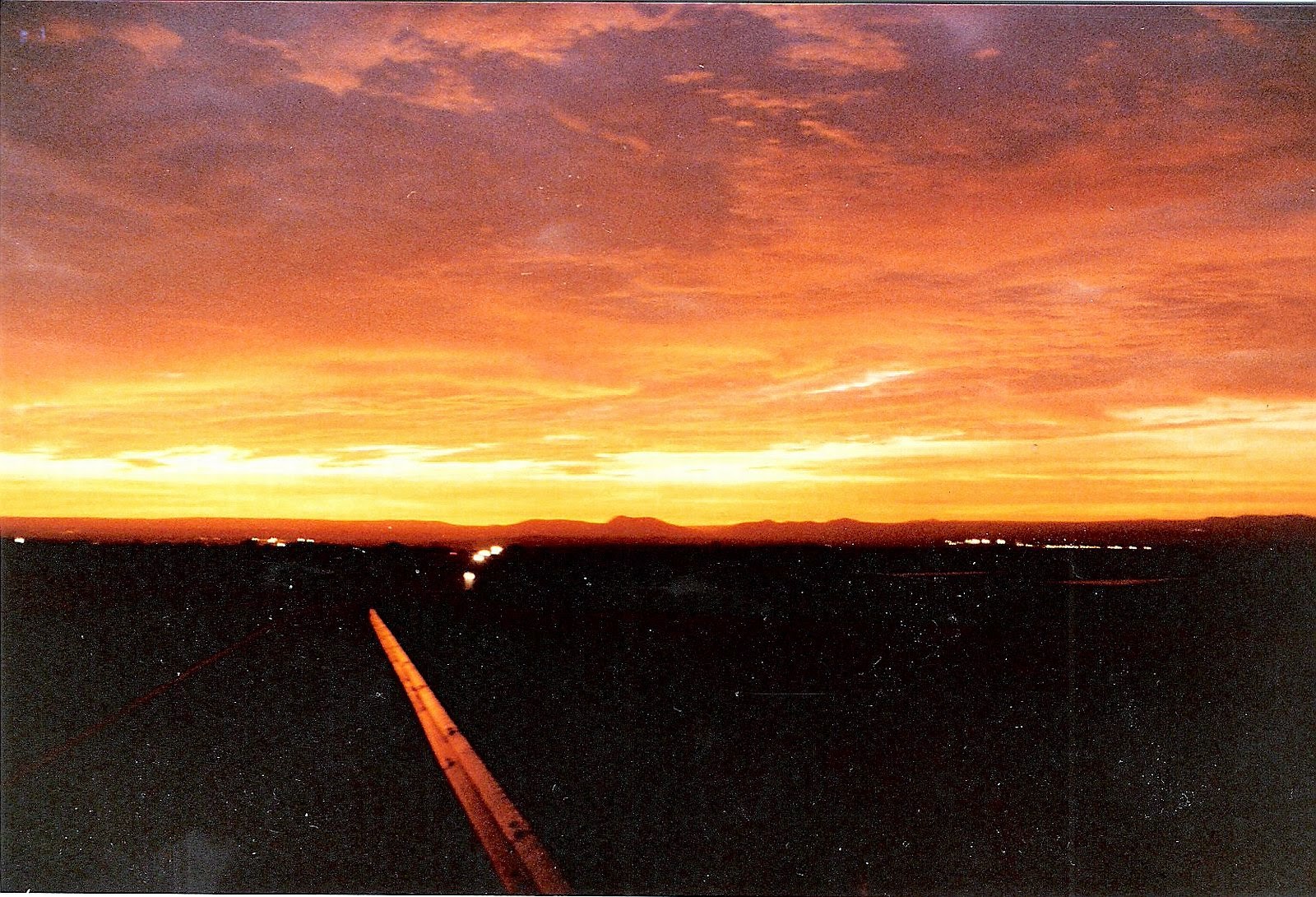